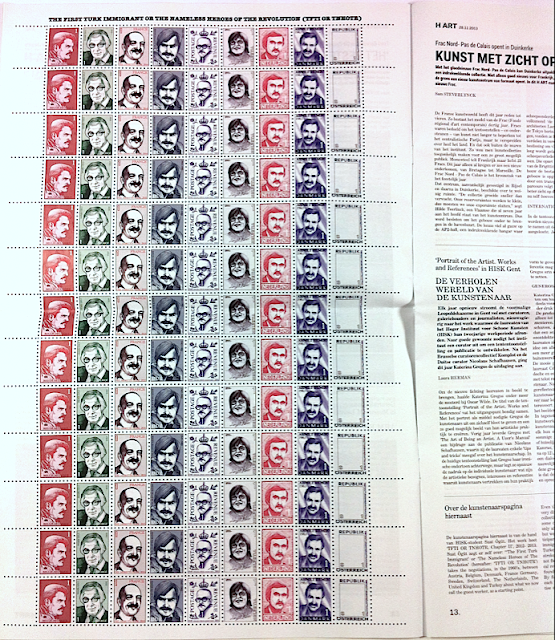 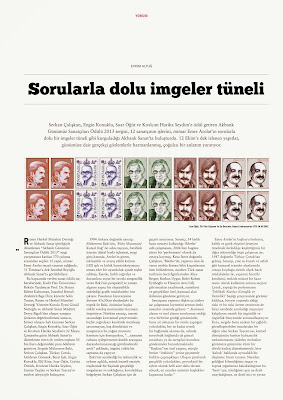 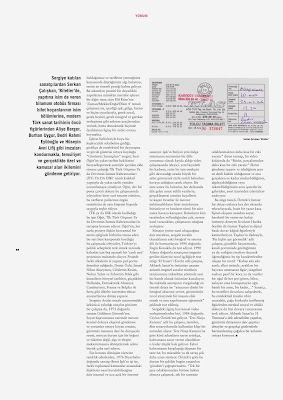 Portrait of the Artist. Works and References 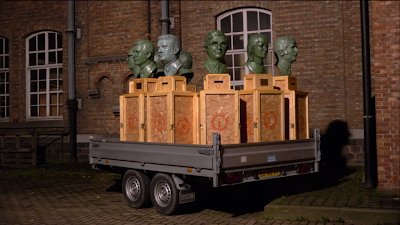 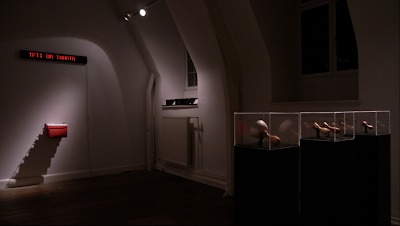 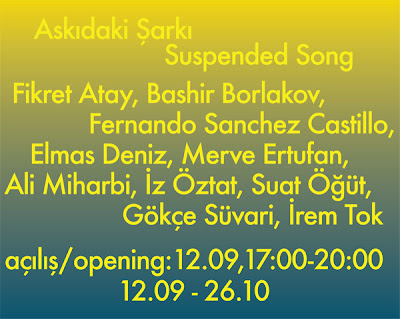 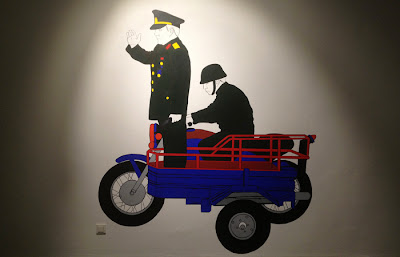 12 SEPTEMBER - 2 NOVEMBER
Co-PilotSıraselviler Cad. no: 85A, Istanbul, Turkey
Suspended Song is coined after a composition written by Italian composer Luigi Nono in 1955-56. It is created from letters written by victims of Nazism for the human voice, chorus and orchestra, and its tune circulates between sounds and instruments that do not voice more than one note at a time. The exhibition is influenced from the song itself and its name, rather than the events and the period that it is dedicated to.
The exhibition called “Suspended Song”, which takes place in Co-Pilot, includes videos, paintings, sculptures, text and installation works of ten artists. The works of İz Öztat, Elmas Deniz, Merve Ertufan, Gökçe Süvari, İrem Tok, Fernando Sanchez Castillo, Bashir Borlakov, Ali Miharbi, Suat Öğüt and Fikret Atay carry traces of a fragile and lacunary world.
The first node of the exhibition is established between Merve Ertufan and Ali Miharbi. Two artists embark on a "civil" search and "look at the faces of other people". Miharbi visualizes the issues of democracy and representation by making us search our own faces among the faces in the parliament, while Ertufan delves into the politics of looking at another’s face. While Ertufan seeks out the “unknown other” among the faces she pans her camera over, Miharbi looks for a “familiar” face among representatives in the parliament. Both come up with an agglomeration of acquaintances comprising a large number of unknown others.
The concept of “being on the move” constitutes another node, the study of things that go and that don’t. İz Öztat’s work began with research on meanings of the word “strike”, which was first used to describe “stopping work” when sailors struck down the topgallant sails of merchant ships to prevent them from sailing. She matches the sail with the “hand fan”, a cliché symbolizing rest and pleasure. Depicting a hand striking a fan against the sail to fill it, Öztat produces a poetic image of a desperate effort, possibly a wild goose chase, but also a hope to achieve the impossible. The works of Bashir Borlakov and İrem Tok also share the same poetic visuality. Tok is an artist who believes in the soul of objects/things. She thinks that turning of scrapped ships into razorblades creates a deep feeling of sadness. With a small touch, she retransforms the razorblade-turned ship scraps into a likeness of their former selves. She produces a ship unable to move and sharpened/embittered due to what it has undergone, but still carrying traces of hope within. This sharpness, this state of being altered so much as to hurt when touched, forms the basis of the work of Elmas Deniz. Deniz portrays the normalized person, chipped of by work, school and family. “Writings” which play an important role in the works of Deniz, are encountered in the context of a different imagery this time. Her work evokes the power of a “writing” which can be read with one’s eyes closed, leaving a physical impression on those who touch it. Bashir Borlakov, who is well-recognized with his panoramic photograph series, produces a video project for the first time in many years. His work, depicting the artist himself -who is in constant motion between Russia and Turkey- walking towards the mountains with a suitcase in hand, can be read as an autobiographical work, as well as the portrait of a man/an artist in ineliminable solitude among crowds. While watching this video, it is important to remember Marquez's "Red Monday", the story of a murder which everyone knows will be committed and keep in mind the recent history of Turkey.
Spanish artist Fernando Sanchez Castillo fictionalizes a different relationship between two riot control vehicles, and in an unfamiliar way, stages a waltz dance between them. Suat Öğüt, pictures a bumpy road, and Gokce Süvari writes a semi-fictional story over the dog named Loukanikos, who appeared at the forefront of the protests in Greece. 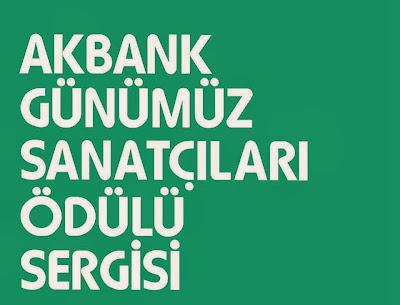 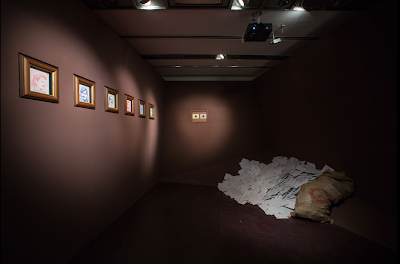 The prize winners for the Akbank Contemporary Artists Prize 2013 were announced at the awards ceremony on the May 22nd 2013 at Akbank Sanat.Award winning artists: Serkan ÇalışkanEngin KonukluSuat ÖğütKıvılcım Harika Seydim

The Open Studios give the first year candidates the opportunity to undergo a first confrontation with the public and to generate a lot of feedback from professionals in the visual arts. For the second years that seems to be a turning point in the build-up towards the final presentations at the end of the year. In any case the Open Studios offer the audience access and insight into the artistic development process of a young generation of artists who will contribute to shaping the artistic landscape for years to come.

THE RESEARCH AND DESTROY DEPARTMENT OF BLACK MOUNTAIN COLLEGE 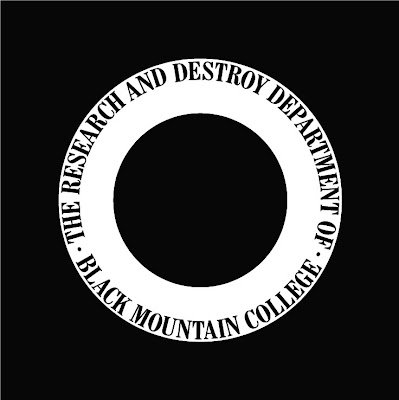 For a brief moment the revolutionary ideas on art and living of Black Mountain College resonate in the spaces of W139. The work of more than 30 young conceptual artists meets in an experimental Wunderkammer and engages in a tactile dialogue creating a performative space.
THE RESEARCH AND DESTROY DEPARTMENT OF BLACK MOUNTAIN COLLEGE brings together a group of bricoleurs, conceptual artists whose work share the idea of collecting. The physical shape of the work is determined by the content of their own research. The gathering, or ensemble of different ideas in literary images tells a story, and stands close to the notion of anachronism. In the exhibition mostly three-dimensional works will be presented, forming a dynamic parcours, as a forest of metonymic sculptures and images. The displaying of this anti-digital show will create new conceptual reflections between the different works. With 30+ artists the exhibition spaces of W139 will take on the temporal form of a giant cabin of curiosities, a physical embodiment of knowledge. The unforeseen encounters will be spurring new insights and fuel an active dialogue on exchange, collaboration and collection. Together, the large group of artists will have to overcome the inhuman proportions of the W139 exhibition space and engage in a spatial relationship with each other’s work, In the rear space Thomas Raat will transform the pattern of the mosaic floor of the Radio Kootwijk building into an enormous mural, making the large back wall an impressive rhythmic backdrop of repetitive ornaments.
The title of the exhibition functions as a boutade for the works of a new generation, born in the late seventies and eighties. Research and Destroy is an abbreviation of the cultural cliché research and development. Search and destroy is a military term for heat seeking missiles and small interventions on hostile grounds, and also an amazing punk song by The Stooges (1973). Black Mountain College refers to the experimental college which placed the arts at the centre of all learning processes. Their education methods were revolutionary and have been an inspiration for many ever since.
Spurring the imagination. Challenging habits of seeing. Learning through doing and emphasizing the experimental necessity of progressive education methods. Black Mountain College was not an art school. Focusing on the education of the whole person, the college placed the arts at the centre of the learning process and community life on the campus functioned as an important part of the curriculum. Living and creating together. The college was initiated in 1933 by John Rice and housed its campus under the Blue Ridge Mountains, North Carolina until 1957. The new experimental college was founded at the time of the Great Depression and after the closing down of the Bauhaus. Soon after its doors opened Josef and Anni Albers came to the college and would become its most prominent influences for education, bringing with them the spirit of modernism and the intertwinement of art and living. Although the college only existed for a brief period of time its revolutionary and radical ideals considering education have been resonating for many years and left their traces in many art schools today. This is where this exhibition starts...
Interventions by Rosa Sijben, Jan Hopf & Felicia von Zweigbergk
Special designed posters by Joris Kritis, Stian Adlandsvik, Asger Behncke Jacobson
Logo by Jean Bernard Koeman and Asger Behncke Jacobson, after the College logo door Josef Albers, 1933
Texts by Anne van Oppen and Jean Bernard Koeman
Curated by Jean Bernard Koeman
Artists
Saar Amptmeijer,Leyla Aydoslu, Sara Bjarland, Sven Boel, Kees Boevé, Antonia Breme, Crystal Z Campbell,Melanie Ebenhoch, Johan Henning, Roderick Hietbrink, Jeroen van der Hulst, Saskia Noor van Imhoff, Katrin Kamrau, Daniel vom Keller, Bram Kinsbergen, Linda Lenssen, Mahal de Man, Tim Mathijsen, Sofia Montenegro, Xue Mu, Suat Öğüt, Marc Oosting, Olivia Alders Plessers, Thomas Raat, Natalia Rebelo, Daniel Rödiger, Fabian Schröder, Kema Spencer, Edward Clydesdale Thomson, Britt Vangenechten, Kasper de Vos,Jonas Wijtenburg, Emile Zile